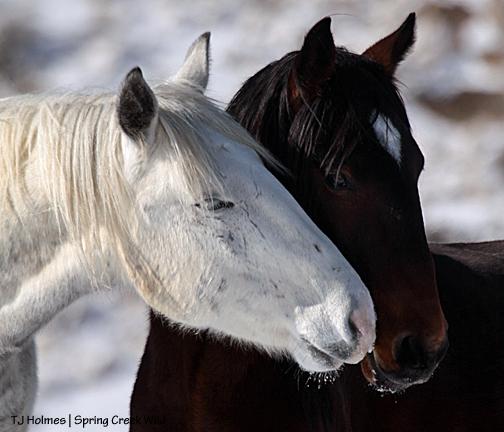 T.J. Holmes is a journalist and blogger living in southwestern Colorado who beautifully chronicles the lives of a herd of wild horses living in the BLM’s Spring Creek Basin Horse Management Area. She is also an advocate for the horses, and a trained (by Dr. Jay Kirkpatrick himself!) volunteer authorized to dart wild mares with the contraceptive PZP. For amazing, up-close details of the lives of a typical herd of wild mustangs, you can’t do better than to follow T.J.’s blog, Springcreekwild.wordpress.com. But for an overall look at her work with the horses, here’s T.J. in her own words and images. Read on!

My now-10-year love affair with mustangs, specifically Spring Creek Basin mustangs, started in a newsroom. The editor asked the newsroom at large if anyone was interested in writing about them. My hand shot into the air – alone.

The mustangs exceeded my skeptical expectations in every sense. They were stunning. Gorgeous in a way that was matched by their magnificent backdrop. WILD. A photo I took that led the story showed the romance: wild horses galloping into the sunset with the La Sal Mountains dominating the skyline. Since then, I’ve spent most of the last several years trying to dispel romantic myths while balancing my passion with reality.

In 2007, I was the editor of a small weekly newspaper. I attended the roundup that year – my first – and asked the question that would catapult me to where I am now: “Why do you round the horses up this way (with a helicopter)?” A government official responded: “This is the only way to do it.”

Are you kidding?! Ask 10 horse people how to do something, and you’ll receive 20 different answers. Just one way to do something with horses? That was an unacceptable answer.

Within a month of our roundup, I learned that official was very wrong, and the seeds for new, better management for our Spring Creek Basin mustangs were planted.

First, I attended the roundup at Little Book Cliffs Wild Horse Range, near Grand Junction, Colo. There, the only thing similar to our roundup was that a helicopter pilot herded the horses toward a trap site. But there, volunteers from Friends of the Mustangs helped BLM officials bring the horses calmly into a series of small pen, one family at a time. There was room for about four bands, and when the pens were filled, the roundup was done for the day. Then, because of extensive documentation by volunteers, particular horses were removed quietly and easily – AND THE REST WERE RELEASED. That was a huge moment for me. For our small herd (at close to 120 horses in 2007, almost double the population it should have been, according to our appropriate management level), the roundup took three days. Ten horses were released on the fourth day, and the remaining horses were divided into two other groups: one bound for the adoption event and one bound straight for Canon City, where BLM has a short-term holding facility within the prison complex.

Second, I visited Pryor Mountain Wild Horse Range in Montana and Wyoming. There, I met Matt Dillon, then the director of the Pryor Mountain Wild Mustang Center in Lovell, Wyo. I had corresponded with him before I went and knew my education was about to take a leap forward.

Matt went through PZP training in the winter of 2009 with Dr. Jay Kirkpatrick at the Science and Conservation Center in Billings, Mont. In the summer of 2010, I followed his example. At the time, we didn’t even have a green light from our BLM officials in Dolores, Colo., to start a PZP program in Spring Creek Basin.

“We” is the National Mustang Association/Colorado chapter. All the original founders since have left, but two people who joined the board shortly after its formation, Pati and David Temple, still are on the board today. In early 2008, Pati and David were two of the founding members of Disappointment Wild Bunch Partners, a coalition of groups that includes NMA/CO, Four Corners Back Country Horsemen and Mesa Verde Back Country Horsemen. Our goal was to bring all our voices to BLM as a single strong voice.

In 2011, with new management in the local BLM office and a roundup looming, BLM approved the implementation of a fertility control program using native PZP. We were ready! NMA/CO had sent me to Jay’s training and paid for my darting rifle.

Training with Jay was incredible. I did a lot of homework before I attended in order to write our PZP proposal, which was submitted in the spring of 2010. I was in contact with Jay before I attended the training, courtesy of one of my friends with Friends of the Mustangs (Little Book Cliffs herd). Interestingly, this person – and everyone else I had talked to – held Jay in such high esteem that he had become a rock star to me, someone to be admired, from afar. The idea that I could actually TALK to him had me shaking in my boots. When I finally gathered my courage and contacted him, I said as much. His response: “Ask me anything. I don’t bite.” When I finally met him, I might have freaked him out in my rush to give him a big hug! For making such a difference in the management of our wild horses, I can’t begin to thank him enough.

This winter will be the second season of darting in Spring Creek Basin. We won’t know until this spring how successful last year’s darting was – until the treated mares DON’T have foals. It’s important to know that nothing in the natural world is 100 percent, and it doesn’t happen overnight. A mare’s gestational cycle lasts 11 months – in effect, a year.

A couple of months ago, I told Jay that of the 10 mares we darted, only one – a 2-year-old filly – had changed bands. That’s pretty natural. So much for the hype that PZP will cause mass chaos and upheaval among the bands because the mares continue to come into heat every month. As of now, only one other mare has changed bands. In fact, more mares that were not treated have changed bands. The reaction to being darted has been nearly uniform: They trotted off a short way, then went back to grazing.

It’s important to mention that we don’t want to stop the population growth of the herd in Spring Creek Basin but rather slow it, with the goal of limiting roundups and the number of horses removed – which is necessary to enable the range to sustain a healthy population of mustangs – in favor of in-the-wild management. Also, we hope BLM will move from helicopter-driven roundups to bait trapping, as was successfully done on Pryor Mountain last year. 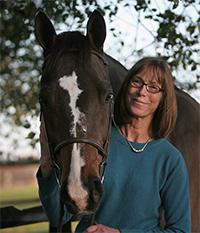 Kay Frydenborg fell in love with horses at an early age, and now she often writes about them. She lives in Pennsylvania with her husband and three dogs, and rides her beloved horse, Remy, almost every day. The Wild Horse Scientists is her first book for Houghton Mifflin. Visit her website at www.kayfrydenborg.com.